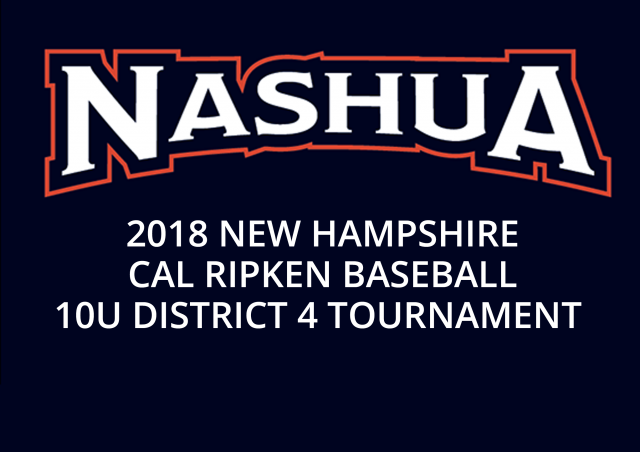 Game 1
Amherst 15 vs Milford 1 Tyler Fox had a strong outing on the mound for Milford. Joe Mayo, Matt Nowak, and Brody Smith led the way with two hits a piece for Amherst. It was an early decision for Amherst over Milford. Game 2
Bow 6 vs Merrimack 9 Pitchers Evan Sousa and Owen Masten had strong outings on the mound for Merrimack, while Luke Bourbeau and Bobby Johnson each scored two runs.. John Sisk and Blake Crowell each scored twice for Bow.   Game 3
Nashua 7 vs Amherst 2 Nashua pitchers Kyle Emmons and Jack Razzaboni both had great outings with five strikeouts a piece, holding and Amherst to  five hits and two runs. Andrew Byrne had two RBIs and Jacoby Caissie scored early in the first inning. Game 4
ConVal 3 vs Merrimack 4 ConVal’s Durham Gilligan, and followed up with 2 hits and 2 runs.  The team came up just short in the end. Merrimack’s Kurt Kabel earned the save. Game 5
Bow 0 vs Amherst 12
Jon Silk and Peyton Larrabee combined in a no-hitter for Amherst on Father's Day. Amherst jumped ahead early and never looked back. Ryland Raudelunas had two hits of Amherst's three hits and scored twice in the winning effort.

Game 8
ConVal 9 vs Amherst 8
Durham Gilligan went 4 strong innings for Conval, scattering 4 hits and allowing only two runs. ConVal jumped to an early lead, gathering 7 of its 8 runs in the first two innings. Dylan Beisang went 5 for 5 at the plate in the win, with Isaac Clough adding 3 more hits. Gilligan and Rocco Lazzaro each had two hits for ConVal. Amherst staged a late rally, scoring 4 in the bottom of the sixth inning before being stopped by ConVal's closer - Gus Hatmaker.

Game 7
Nashua 16 vs Merrimack 4
Merrimack jumped out to an early lead with 3 runs on 3 hits in the first inning, before Jacoby Cassie came in in relief for Nashua in the second. Cassie and a strong Nashua defense held Merrimack to 1 hit and 1 additional run through 4 2/3 of relief. Nashua's offense was led by Taylor Joyal with who was 3 for 3 with a walk and 3 RBI, and 9 of Nashua's starters scored runs. Andrew Byrne and Joe Hebert added doubles in the winning effort.  Nashua moves on to the finals on Thursday night.

Game 10
Nashua 20 vs Merrimack 3
Nashua swept the District 4 Cal Ripken tournament winning 20-3 in the finals over Merrimack. Nashua’s offense was a balanced attack with  17 hits in the final. Kyle Emmons, Jack Razzaboni and Michael Witkowski pitched well, holding Merrimack to just 3 hits in the finals.  For the tournament, Nashua scored 43 runs in three games on 35 hits, and held its opponents to 9 total runs and just 12 hits overall.  Nashua advances to the NH State Championship in Rochester in July.